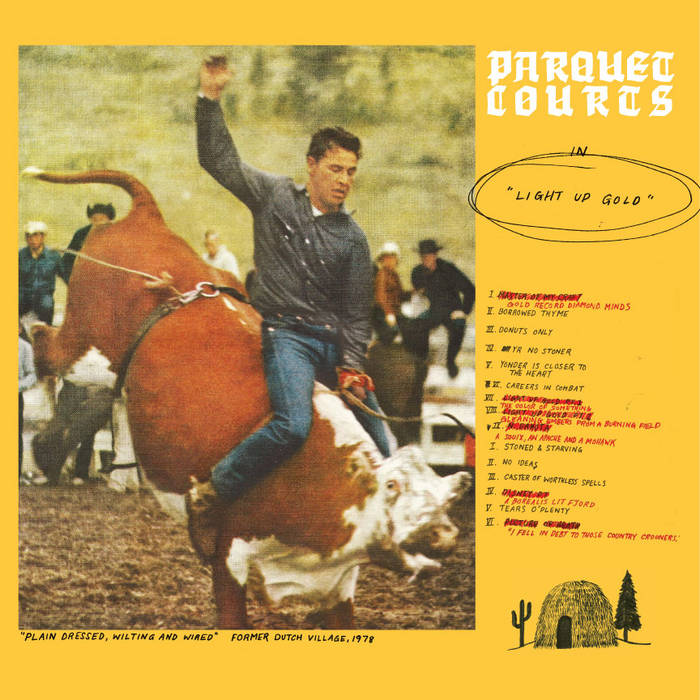 Lucas Dvorsky Sounds like The Strokes became total slackers, smoked a lot of weed, and started to listen to Sonic Youth and Yo La Tengo. Great shit.
more...

Little was said about Parquet Courts' debut effort, American Specialties. Released exclusively on cassette tape, the quasi-album was an odd collection of 4 track recordings that left those who were paying attention wanting more. A year of woodshedding live sets passed before the Courts committed another song to tape. The band's first proper LP, Light Up Gold, is a dynamic and diverse foray into the back alleys of the American DIY underground. Bright guitars swirl serpentine over looping, groovy post-punk bass lines and drums that border on robotic precision. While the initial rawness of the band's early output remains, the songwriting has gracefully evolved. Primary wordsmiths A. Savage and Austin Brown combine for a dynamic lyrical experience, one part an erudite overflow of ideas, the other an exercise in laid-back observation. Lyrically dense, the poetry is in how it flows along with the melody, often times as locked-in as the rhythm section.

“This record is for the over-socialized victims of the 1990's 'you can be anything you want', Nickelodeon-induced lethargy that ran away from home not out of any wide-eyed big city daydream, but just out of a subconscious return to America's scandalous origin," writes Savage in the album's scratched-out liner notes. Recorded over a few days in a ice-box practice space, Light Up Gold is equally indebted to Krautrock, The Fall, and a slew of contemporaries like Tyvek and Eddy Current Suppression Ring.

Though made up of Texan transplants, Parquet Courts are a New York band. Throw out the countless shallow Brooklyn bands of the blasé 2000's: Light Up Gold is a conscious effort to draw from the rich culture of the city - the bands like Sonic Youth, Bob Dylan, and the Velvet Underground that are not from New York, but of it. A panoramic landscape of dilapidated corner-stores and crowded apartments is superimposed over bare-bones Americana, leaving little room for romance or sentiment. It's punk, it's American, it's New York... it's the color of something you were looking for.

Bandcamp Daily  your guide to the world of Bandcamp

Interviews With Butcher Brown and Slauson Malone, plus LP of the week by SAULT.